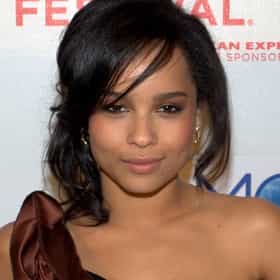 Zoë Isabella Kravitz (born December 1, 1988) is an American actress, singer, and model. She is the daughter of musician Lenny Kravitz and actress Lisa Bonet. Kravitz made her acting debut in the 2007 film No Reservations. Her breakthrough role came as Angel Salvadore in the 2011 superhero film X-Men: First Class, which was followed by roles in The Divergent Series and Mad Max: Fury Road. Since then, Kravitz has had supporting roles in such films as The Lego Batman Movie and the Harry Potter spin-off film Fantastic Beasts and Where to Find Them, a role she reprised in its sequel, as well as starring roles in independent films, like Dope and Adam Green's Aladdin. Since 2017, Kravitz ... more on Wikipedia

Zoe Kravitz Loves and Hookups 35.8k views Who is Zoe Kravitz dating? Many famous men have dated Zoe Kravitz, and this list will give you more details about these luck...

Zoë Kravitz is ranked on...

Zoë Kravitz is also found on...