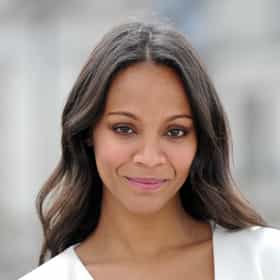 Zoë Yadira Saldaña Nazario is an American actress. Following her performances with the theater group Faces, Saldana made her screen debut in a 1999 episode of Law & Order. Her film career began a year later with Center Stage (2000), where she played a struggling ballet dancer. Saldana became known for her work in science fiction films, beginning in 2009 with her first of multiple appearances as Nyota Uhura in the Star Trek film series and her first appearance as Neytiri in the Avatar film series. She has also played Gamora in the Marvel Cinematic Universe, beginning with Guardians of the Galaxy (2014). Due to her appearances in some of the highest-grossing films of all ... more on Wikipedia

Zoe Saldana Loves and Hookups 8.9k views Who is Zoe Saldana dating? Many famous men have dated Zoe Saldana, and this list will give you more details about these luck...
The Best Zoe Saldana Movies 1.7k votes List of the best Zoe Saldana movies, ranked best to worst with movie trailers when available. Zoe Saldana's highest grossing...

Zoe Saldana is ranked on...

Zoe Saldana is also found on...