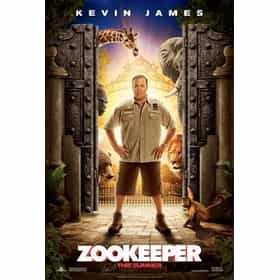 Zookeeper is a 2011 American romantic comedy film starring Kevin James and featuring the voices of Nick Nolte, Sylvester Stallone, Adam Sandler, Judd Apatow, Cher, Jon Favreau, and Faizon Love. The film contains computer animation, is produced by Sandler's production company, Happy Madison, and was distributed by Columbia Pictures, and Metro-Goldwyn-Mayer. The film was released on July 8, 2011.The film revolves around a luckless zookeeper who turns to the animals at his zoo to help him find love. Though the film was poorly received by critics, it was a box-office hit. ... more on Wikipedia

Zookeeper is ranked on...

Zookeeper is also found on...