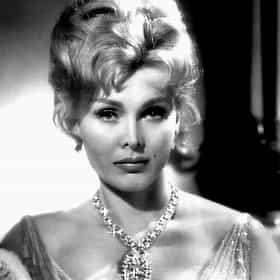 Zsa Zsa Gabor ( ZHAH-zhah GAH-bor, -⁠ gə-BOR, Hungarian: [ˈʒɒʒɒ ˈɡaːbor]; born Sári Gábor [ˈʃaːri ˈɡaːbor]; February 6, 1917 – December 18, 2016) was a Hungarian-American actress and socialite. Her sisters were actresses Eva and Magda Gabor. Gabor began her stage career in Vienna and was crowned Miss Hungary in 1936. She emigrated from Hungary to the United States in 1941. Becoming a sought-after actress with "European flair and style", she was considered to have a personality that "exuded charm and grace". Her first film role was a supporting role in Lovely to Look At. She later acted in We're Not Married! and played one of her few leading roles in ... more on Wikipedia

Zsa Zsa Gábor is ranked on...

Frank Sinatra's Loves & Hookups 103.4k VIEWS Who did Frank Sinatra date? Who Frank Sinatra dated; list of Frank Sinatra loves, ex girlfriends; breakup rumors. The loves,...
54 Famous Amputees 595.8k VIEWS List of Famous Amputees, loosely ranked by fame and popularity. An amputee is an individual who has lost a body extremity. S...
Actors and Actresses Who Died in 2016 778.2k VIEWS   Car accidents, drug overdoses, and other surprising deaths make up the bulk of the actors and actresses who died to...
Celebrities Who Have Been Married 4 (or More!) Times 1.1M VIEWS Famous people seem to have a knack for binge marrying. Divorces and weddings come and go with such frequency that it can bec...
#39 of 99 The Most Beautiful Women Of The '60s 1k VOTES This list of 1960s models, actresses, singers, and stars ruled the airwaves in the '60s, and many became pop cultu...
Celebrities Who Play Piano 96.5k VIEWS   Learning to play the piano can definitely be a challenge, but these celebrities have mastered the art. Celebrities ...